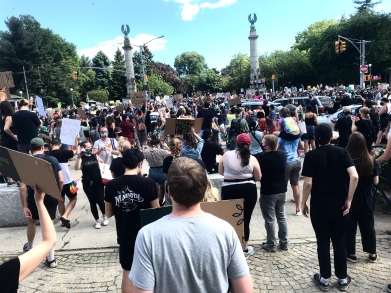 The winds at Grand Army Plaza in Brooklyn blew wildly yesterday. It’s been two weeks since George Floyd’s killing, and the Mayor has dialed back the police presence and let the people come out. There was a feeling of hope, here, that something good could come out of this.

I am well aware that it takes more than showing up at a few demonstrations to bring sight to the blind. It takes a commitment to see my flaws, and a great deal of shame and discomfort with all the ways I make those invisible around me who deserve respect. If we as a culture succeed in bringing about change, it will be done with pain, revelation, and truths that won’t sit well. That’s the price of a revolution.

Still, I’m glad to see so many people on the streets. And signs. Children with BLM placards. Young white adults carrying signs against police brutality . . . those least likely to experience institutional (or personal) prejudice. I hope they mean it; and will do so in three months; six months, two years, and ten years down the road.

It’s human nature to hope for big changes. It’s also human nature to get distracted and complacent. If there’s anything good to be said for this pandemic, it brought the country to its knees, a good place to see who else has been in that unfortunate position for generations.

NPR reported that the Minneapolis city council proposed abolishing their local police force. This will, I’m sure, inspire the conservative pundits to call it the end of civilization. But it’s not the end at all.

Many people of color will reply that it’s the beginning.

Welcome to my new blog!